Now, the latest talks to join the spotlight are the predictions on NBA 2K17 MyTeam ratings of the two players LeBron James and Stephen Curry.

As we all know, the 2015-16 NBA season is a year full of a miracle. When it comes to the regular season, there is a record of 72 wins to end the Bulls dynasty. With 402 tickets, Curry was unanimously elected regular season MVP.

Led by LeBron James, Cavaliers managed to win the first championship in the history. In the finals, led by James, Cavaliers beat the Warriors led by Curry despite the initial score of 1: 3.

In NBA 2K16, James has a overall rating of 94, a minor victory over Stephen Curry's 93. Who will be the number one? 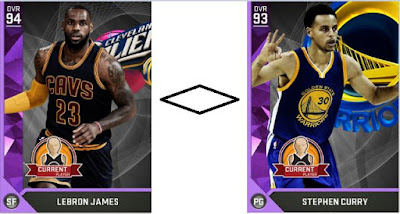 LeBron James
With 53 seconds before the whistle, the Cavaliers beat the Warriors in the tiebreak war, managing to win the 2015-16 NBA championship season. The Cavaliers became the first team in the NBA playoff history to 11 in 1: 3 realization of the case behind the reversal of the team. It is the only team in finals history to complete the miracle, creating a new NBA record history. James scored 27 points, 11 rebounds, 11 assists, and perfect triple-double and led the Cavaliers to get 45 of the season's first NBA championship. It is Cleveland's first championship in 52 years. James dominated with outstanding performance in scoring, rebounding, assists, blocks and stealing. With the top 5 data, he's the first player in the history.

Stephen Curry
Stephen Curry was elected NBA 2015-2016 regular season MVP. He got all the 131 first ballot, and also became the first in history unanimously elected MVP player. Curry led the Golden State Warriors to have 73 wins 9 losses, making history of the best regular season record. Curry became the only one this season with three hit rate of 50%, respectively, 45% and 90%. The 24-game winning streak is also the longest winning streak in NBA history, creating a new record, and breaking the Congress in Washington and the Houston Rockets in NBA history to start jointly held a record 15-game winning streak. The team becoming the best record starts to the defending champion in history.
Curry has had 402 three-pointers. In a single season in league history to record three-point shot number to create the 2014-15 season, Curry 286 pointers.
Thus, Curry three-pointers made this season to reach 402, creating the new NBA single-season three-pointers made a new record. This season, Curry averaged 30.06 points, shooting over 50%, three-hit rate of 45%, free throw percentage over 90%. Curry after Jordan became the first field H 30+ points and shooting 50 percent of the guard.

According the two players' team and their individual honors, Curry's personal highlight was shadowed by the opponent's unexpected victory in the finals this year. He was expected to dominates in NBA 2K17, but the final results make it difficult to rate the two players in the game. According to fans, LeBron fans will have a lot of complain if Curry has the highest rating. If LeBron is the highest rated, it is unfair when it comes to the individual honors. According to prediction, both players will the parallel TOP 1 in NBA 2K17 MyTeam mode, with a rating of 95.

If you want to read more news, please keep eyes on our news page to know more information about www.u4nba.com and NBA 2K17 MT Coins will be sold here as well, stay tuned!
Posted by Unknown at 6:43 PM